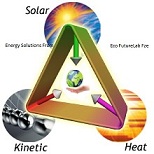 Future Labs FZE have developed a new alternative energy system that harvests mechanical energy embedded into roadways, railways and runways from passing vehicles, trains and pedestrian traffic and converts it into electrical energy.

The system, based on a new breed of KINZI kinetic generators, harvests energy that ordinarily goes to waste and can be installed without changing the habitat.

Eco Future Labs FZE, UAE based Thermophotonics solar development company has developed TURBO ™ cell technology that increases the efficiency of Solar Photovoltaic panels by up to 50% while reducing the weight of conventional Photo voltaic panels by 40%.

The TURBO™ technology can be an easily integrated accessory to an existing solar PV manufacturing system.
Based on electromagnetic principles, the TURBO™ Concentrator enhances the capabilities and efficiency of existing solar cells by focusing and tuning the incident solar radiation from the sun for optimal silicon absorption, with less of the total spectrum lost as heat or reflection. In essence, the TURBO™  “turbo-charges” an existing system by significantly increasing the silicon PV’s ability to absorb light at the optimal energy-producing wavelengths, not only from visible but also the Ultra Violet, and Infrared radiation
Output increase by 50%
Weight Reduction by 40%
Manufacturing Time Reduced